Millais exhibited his Christ in the House of His Parents at the 1850 Royal Academy. It is shown below. It was also called The Carpenter's Shop, as it shows Jesus seeking comfort from Mary as he has hurt his hand on one of the splinters of wood in Joseph's workshop. This wound symbolises the wounds from his crucifixion. The young John the Baptist is bringing a bowl of water to wash the wound to remind us that later he washed Jesus in the River Jordan when he baptised him. 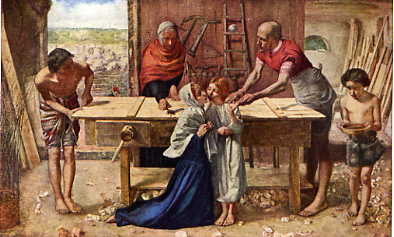 Charles Dickens  on Millais' Christ in the House of His Parents

Charles Dickens, the great novelist, made a violent attack on  Millais' Christ in the House of His Parents in his magazine, Household Words of  June 1850. This is what he said,

In the foreground of that carpenter's shop is a hideous, wry-necked, blubbering, red-headed boy in a bed- gown; who appears to have received a poke in the hand, from the stick of another boy with whom he has been playing in an adjacent gutter, and to be holding it up for the contemplation of a kneeling woman, so horrible in her ugliness, that (supposing it were possible for any human creature to exist for a moment with that dislocated throat) she would stand out from the rest of the company as a Monster in the vilest cabaret in France, or the lowest gin-shop in England.

The 1851 Pre-Raphaelite Exhibits at the RA led to another attack by Dickens..